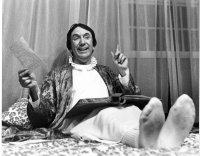 The play centres on a wealthy self-indulgent bourgeois, Argan, who is obsessed with his health and craves attention. His obsession makes him a perfect target for the medical charlatans of the day and for a grasping second wife, Beline, who hopes to see him killed off by the doctor's cures so that she may inherit his fortune. To save money, Argan insists that his daughter, Angelique, marry someone in the medical profession and chooses the imbecile young man about to graduate as a doctor. Angelique, however, is in love with another man. 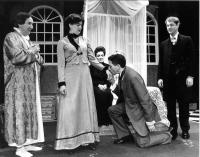 Through the efforts of Toinette, a saucy servant, the mercenary wife is revealed to the blind husband and the daughter permitted to marry the man she loves. By disguising herself as a ninety year old doctor, Toinette comically carries Argan's obsession to its absurd extreme. The play is filled with Moliere's parodies of social types, including Bonnefoy, a scheming notary; Purgon, an overpowering physician; and Diaforus, a pompous physician who rejects all new discoveries in medical science and clings to the superstitions of the 'ancients'. 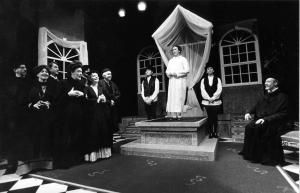