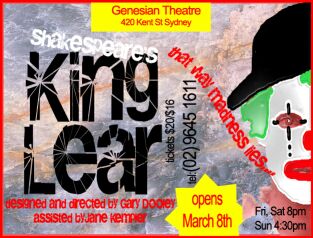 The Genesian Theatre is proud to announce that Saturday 8th March at 8pm will see the opening of a new production of the Everest of theatrical endeavours, KING LEAR.

Widely regarded as William Shakespeare's greatest play, it combines tragedy with some of the most beautiful poetry in the English language. The Genesians last tackled the piece in 1967 with a cast that included Peter Carroll. 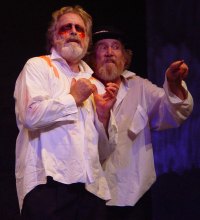 Director Gary Dooley is no stranger to Shakespeare having directed productions in Australia, the United States and England, but this is his first encounter with King Lear. With its storms, battles and violence, this play would stretch the resources of any theatre company however Dooley is undeterred "We've been faithful to the play but I think we still have a few surprises up our sleeve' he says.

This new production of King Lear takes a bold approach, featuring a fine cast of 17 actors and a stunning design using theatrical influences from Edwardian to modern Japanese. The set promises a huge pond with fountains - something we've never seen before on our Genesian stage.

King Lear decides to divide up his kingdom between his three daughters based on which one professes to love him the most. This rash decision is the catalyst for a bloody chain of events culminating in civil war and personal tragedy.

Demand for this season is anticipated to be high and early booking is recommended. 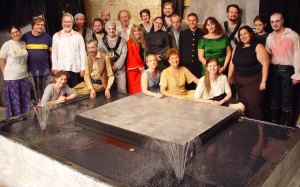