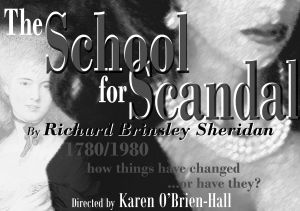 The School for Scandal

The similarities between the "Beautiful People" of the late 20th Century and their late 18th Century counterparts were immediately apparent to Director Karen O'Brien-Hall.

The "Egads, Zounds and Pshaws" of the 1780's characters were reflected in the language of the "Kissy, Kissy, Hug, Hug, Greed is Good, Absolutely Fabulous, Legends in their own Lunchtime" 1980's Socialites. Whilst the setting of this production has moved forward to the 20th century, the language and manners of a play written two centuries earlier have remained" Karen says.

Sheridan biographers agree there was no authorised version of the play published in his lifetime. Current texts may usually be traced to the two volume Murry edition of Sheridan's plays published in 1821. Some of the changes from the original manuscript, such as the blending of Miss Verjuice and Snake, were made for dramatic, or economic, reasons. "We have retained the blended character" says Karen, "but, Snake is now Ms Snake."

A formidable team of Artistic, Production and Acting talent, including some of your favourite Genesians as well as new faces to our stage, have combined to bring together Mr Sheridan's wit and the big shoulder pads of the 1980's, in this sparkling production of The School for Scandal.

We strongly recommended early bookings for this season via MCA Ticketing on 9645 1611 or www.mca-tix.com 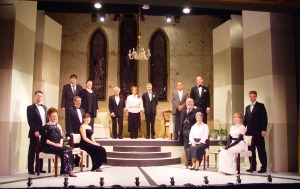