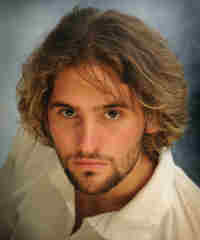 'an excellent place for schools to commence their study of Shakespeare's enduring tragedy. The staging is minimalist, dark, and very well conceived'
OZ Baby-boomer Review

'This was a good night in the theatre. Gimblett's approach to Hamlet was to play it as a thriller with Michael Schell's dark score driving the action. Leon Richardson's take on Hamlet was to show a deeply introverted man who was challenged to his core by the act that he was compelled to undertake. Robert Drew's garrulous, imposing Polonius, and Danielle Cooper's distraught, shattered Ophelia stood out. The cast were helped by Lissa Knight's apt costumes and Owen Gimblett's compact set.'
Stage Whispers Review

The Bard is back! On Saturday, 9th May, Shakespeare's Hamlet opens at Sydney's Genesian Theatre to celebrate its 65th anniversary season. This production of Hamlet is based on Roger Gimblett's acclaimed 2005 staging at the Tom Mann Theatre which engaged and captivated audiences. Shakespeare's tale of the troubled Prince of Denmark comes to life with period costuming and a stunning set and technical design. Director Roger Gimblett brings extensive experience garnered in England, Australia and his native New Zealand directing a variety of work. Hamlet is Gimblett's fifth Shakespeare and follows his successful staging of The Tempest at the Genesian in 2007. 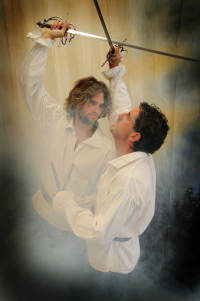 An impressive cast, led by Leon Richardson in the title role has been assembled. Richardson has thrown himself headlong into the emotional and physical demands of playing the Dane. As Sir Derek Jacobi observed "It is a role of dizzying challenge to any actor's armoury of mental, vocal and psychological ingenuity as well as a severe test of his physical stamina."

This memorable production will push the boundaries of the actors and challenge the expectations of the audience but adhere faithfully to Shakespeare's work. The text has been carefully edited to ensure a tight and fast-paced production that will keep patrons on the edge of their seats throughout.

Teachers please note a 'Schools Pack' containing notes on the production and play will be available and question and answer sessions with the cast may be held by arrangement.

This is an outstanding opportunity for school students, lovers of Shakespeare and the first-time Shakespeare audience-member. 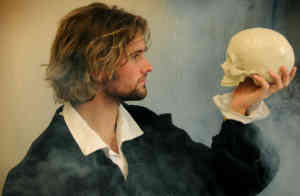