Performing at Kent Street Until 2021!

The Slaughter of St Teresa's Day 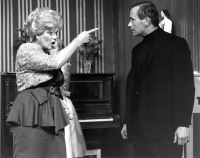 In The Slaughter of St Teresa's Day Peter Kenna recalls the recent past of Sydney's underworld and of Paddington, affectionately known as 'Paddo', a tiny enclave of Victorian houses only a few miles from the centre of the city. It is often compared to London's Chelsea and New York's Greenwich. It's winding hilly streets are punctuated with art galleries, antique shops, restaurants and pubs, and among its inhabitants are many distinguished Australian artists, writers and academics - as well as trendy young people in search of Bohemia. 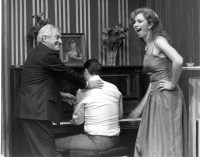 In the 1950s however, when The Slaughter of St Teresa's Day takes place, Paddington was, for the most part, a shabby, battered place, almost a slum. With other inner suburbs, it had declined over the years as its predominantly middle-class residents moved to newer, more fashionable suburbs. The decline, which began after World War I, was accelerated by the Depression of the 1930s when one-third of the Australian workplace was unemployed. Tenants could not pay rent. Owners could not maintain 50-year old houses, with their primitive plumbing and electrical installations, their damp walls and leaky roofs. Family homes became cheap rooming houses, or warrens of tiny 'flats'.

This then was the Paddington in which Peter Kenna locates the household of his robust queen of the underworld, Oola Maguire. Oola strongly suggests a real-life underworld character of the day, Tilly Devine, whose headquarters, however, were not in Paddington but in Woolloomooloo, then another run-down suburb, almost adjacent to Paddington, and a traditional haven of prostitutes and criminals. 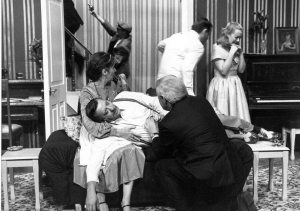