"When things are so deep inside, there is nothing that can tear them out." 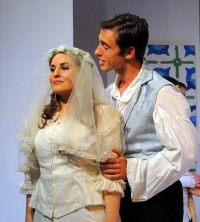 As in all great romances, love never dies in Lorca's classic tale of desire, betrayal and revenge centred on an unforgiving mother. After the loss of her husband and older son in a long and bitter feud with the Felix family, it is too much when her new daughter-in-law has confused feelings for one of its members. Only tragedy can result.

Although usually known as "Blood Wedding", the literal translation is deliberately used to evoke the history of doomed marriages amongst the various families. The production makes extensive use of the beautiful flamenco music of southern Spain, some of which was collated by Lorca himself. Unusually, the play is performed as a dramatic production and not the song and dance spectacular that is often associated with this work. The play enjoyed considerable success in London in 2006 with the exciting Mexican actor Gael Garcia Bernal in a lead role. 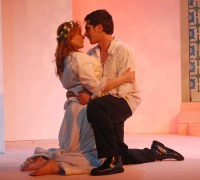 The tragedy extends to Lorca himself, a proud son of Granada. At the age of 38, refusing to leave his home city, he was a victim of the madness of reprisals that swept Spain after Franco's fascist victory in 1936. A giant of his era, confidante of some of the great minds in art and cinema like Buńel and Dali, it is interesting to speculate about the work he may have produced.

Set during a hot, dry summer in no particular era, the white stage with flashes of primary colour and Moorish tile work amidst the black figures brings the Andalucian setting to life. Of course it is a tragedy but its themes of desire for happiness and ultimate reconciliation are universal. 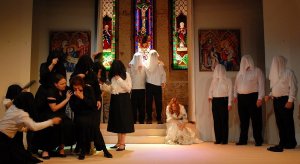