The performance runs for 2 hours, including an interval.

"The course of true love never did run smooth" 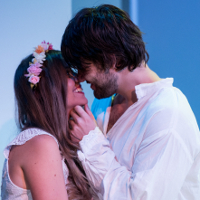 Lysander loves Hermia and Hermia loves Lysander. Helena loves Demetrius; Demetrius used to love Helena but now loves Hermia. When Hermia's father insists she choose Demetrius as a suitor she escapes with Lysander into the surrounding forest where Oberon and Titania, the King and Queen of the Fairies are having their own battle of love.

As the human and magical worlds collide mischief and chaos erupt as love at first sight proves a reality for some and makes an ass of others!!

On Saturday the 7th March the Genesian Theatre will donate 50% of all Box Office takings to charity. Please see our Charity page for the list of charities the theatre has chosen to support this season. We encourage you to come along in support of these causes.