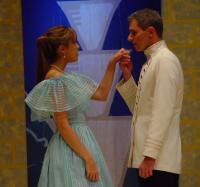 Death decides that he would like to come to Earth for three days and see what it is like to be mortal. "In particular I would like to know something of love" he quotes. He chooses to stay at the Villa Happiness, owned by Duke Lambert. Death reveals his true identity to the Duke only but swears him to secrecy... or else! Added to this Baron Cesarea, a guest at the Villa, believes his life is nearing its end only to discover he is getting younger. What unfolds is a glorious romantic fantasy tale that deals with the serious subject of Death in a most unique way.

The story was made famous in the original screenplay of 1934 starring Fredric March, as Death, in one of his most renowned roles, along with Evelyn Venable as the beautiful Grazia. More recently this romantic fantasy would be remembered by audiences as the movie classic "Meet Joe Black" which starred Anthony Hopkins and Brad Pitt.

Shane Bates, director, has remained true to the original script in her interpretation of the story. "It is the beauty of the language and the truth in the words which first drew me to this play. Mr. Cassello's characters are well defined and their interaction adds many different dimensions to his story."

With a set designed by Clare Singline and lighting by Eric Bicknell, this play will appeal to all ages. Opening at the Genesian Theatre on 14th May, the season will run each Friday and Saturday from 8.00pm and Sundays from 4.30pm until 25th June 2005.