The Hound of the Baskervilles

On Saturday, 3 March 2006, a traditional version of Sir Arthur Conan Doyle's The Hound of the Baskervilles opens at Sydney's Genesian Theatre. This production of The Hound promises to engage and captivate audiences as Conan Doyle's classic tale of a seemingly cursed aristocratic family comes to life in the splendour of the Victorian era. Director, Loretta Tolnai, says "this new production brings back Conan Dolye's much loved and familiar characters in a great old fashioned murder mystery with a few surprises". 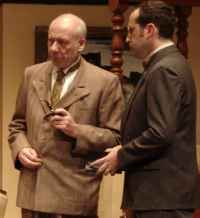 Tolnai brings a creative flair to the production having directed a variety of work from other popular stage productions including The Forsyte Sage and Two Weeks with the Queen as well as Pinter's famous psychological thriller of two unlikely gangsters, The Dumb Waiter.

Tolnai has assembled an impressive cast, led by English actor Keith McIlroy as the famous sleuth, Sherlock Holmes. McIlroy has appeared in many lead roles on the Sydney theatre circuit including 'Glagolyev' in Michael Frayn's Chekhov adaptation, Wild Honey at NIDA Studio; 'Jack Barker' in Dennis Potter's Sufficient Carbohydrate at Strathfield Theatre; 'Uncle Bob' in Mary Morris's Two Weeks with the Queen at Genesian Theatre; 'Harry Kane' in Pinter's The Collection at Pact theatre, to name only a few.

Holmes's trusty confidant, Doctor Watson, is played by Richard Sherwood. Richard has captured the childlike essence of Watson's inquisitive character and brings a wealth of experience to the role. Richard has appeared in Michael Gow's Away and most recently in Tolnai's stage adaptation of The Forsyte Saga.

Tim Kelly's adaptation of this classic book ensures a tight and fast-paced production that will keep patrons on the edge of their seats throughout.